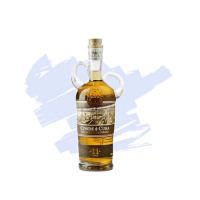 In the 16th century, Cuba was considered the world’s sugar reserve. It was in the ninth century when the Rum became a very popular quality drink. Then distilleries and brands arose. Ron Conde de Cuba is distilled, aged and bottled in Amancio Rodriguez, a small town in the province of Las Tunas with just 2,000 inhabitants. Located in eastern Cuba, in a land whose climate is ideal for the cultivation of indigenous sugarcane ‘Medialuna’. The entire integral system is located in the plantation, including the sugar factory to obtain honey, the distillery, the Ron Sevilla factory and the winery. This whole process is reflected in the different labels, making a very special range of products. ‘The distillery’ Sevilla, annexed to the Amancio Rodríguez Sugar Company, is a paradise where different types of alcohols are made and from them the Cuban rum is born, which walks its fame through the world market. The plantation is located on the banks of the Seville river, one of the most important rivers in the country. Seville, port city of Spain, linked to Cuba since the time of the Colony.

Get this rum now from Ministry Of Drinks