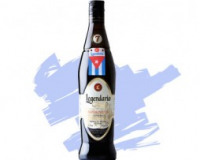 Legendary Ron was founded in the city of Havana since 1946. Legendary although it was known in the domestic market since 1950, is in 1976 when deciding solely on producing factory in Bocoy El Cerro, Havana. Legendary Ron, this is a very pure rum produced by ancient methods: filtering system from double bottom tanks, the use of silica sand and activated carbon, where the dilutions are made aware of alcohol as spirits to 55th, which are processed by gravity in this system, which also includes American oak barrels which are aged brandies and alcohols screeds fresh one, two, four and six years: that is the great secret of Ron Legendary. Holds out the Elixir of Cuba’s famed “Punch au Rhum” Carta Blanca Rum, rum, Ron Añejo Blanco, and Ron Dorado Gran Reserva 15 years.

Get this rum now from Ministry Of Drinks