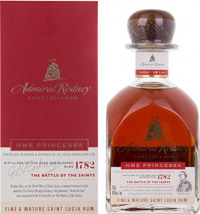 "70cl / 40.0% - The Admiral Rodney rum range from St. Lucia Distillers was inspired by the naval victory of Admiral George Rodney, who ensured British domination of the Caribbean after he defeated the French at Battle of the Saints in 1782. Each rum is named after ships that distinguished themselves in the battle, with this edition being named the 'HMS Princessa'. The HMS Princessa blend contains rums aged for 5 to 9 years which had been made from Coffey still distillates and matured in American white oak Bourbon casks."

Get this rum now from Amazon
(Maybe be discountinued or OOS)